Text-to-Speech generation has always been a long aspiration of the human race. By simply clicking a button, digital devices can convert text into audio. Throughout history, several techniques were developed to make it sound more human. Now, with the help of artificial intelligence, text-to-speech technology has reached new levels.

Let us first take a look at how text-to-speech came to be what it is today.

The first device that resembled speech synthesis was built in 1779 by Christian Kratzenstein. The machine could produce five long vowels (/a/, /e/, /i/, /o/, /u/) artificially. Keep in mind that this instrument was an acoustic resonator, a mechanical device.

Soon after, in 1791, Wolfgang von Kempelen presented his Acoustic-Mechanical Speech Machine. It could generate single sounds and some sound combinations. Charles Wheatstone improved upon it in the 19th century. His version produced vowels and consonants, as well as some words. 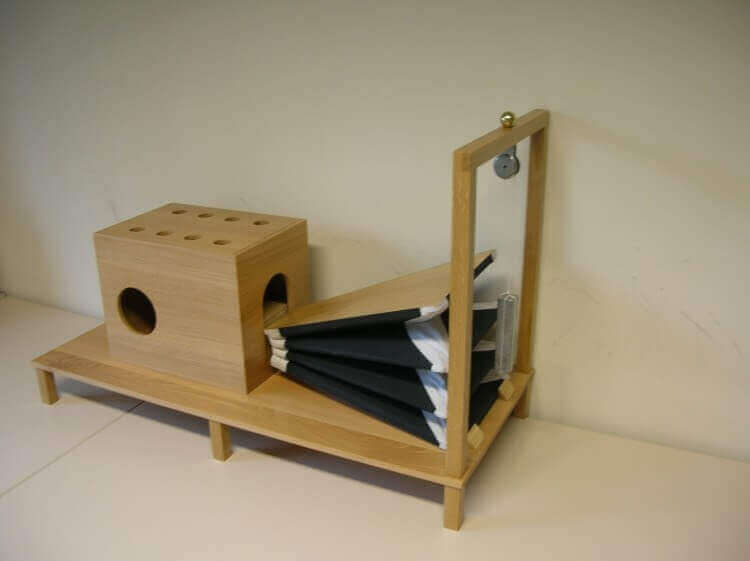 The 1930s introduced new ways on how to generate text-to-speech. Homer Dudley introduced his “Voder,” which was the first electronic speech synthesizer. It was operated via a keyboard, which controlled various aspects of the sound. Ten parallel resonators were responsible for covering all frequencies of the speech spectrum.

But, the system proved to be too difficult to operate. Its users had to spend months training and still produced intelligible language only if paired with the context of a question.

Dudley’s second attempt at speech synthesis came in the form of a device called channel vocoder. Many consider it as the basis for modern text-to-speech devices. It consisted of two parts. The first part analyzes incoming speech signals from natural sound parameters. The second one uses that signal to produce a synthetic sound. 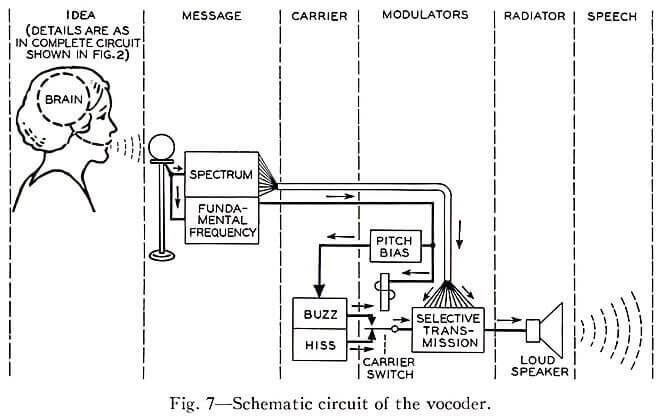 The second half of the 20th century was marked by the development of computer-based systems. Text-to-speech generation followed the trend by replacing large vocoder machines with concatenative data-driven sound synthesis. The method uses an extensive database of source sounds segmented into heterogeneous units. A unit selection algorithm found the best match for a particular sound. This procedure was among the first that made synthetic speech sound more human.

Modern examples of text-to-speech devices are virtual assistants such as Siri and Cortana. Paired with speech-to-text speech recognition, they create a human-computer interaction based on speaking.

There is one interesting fact about Siri. Even though one voice is enough to create a speech synthesis interface, Apple has different variations of English for Siri. Variations depend on the part of the world where the user comes from. Naturally, iPhone users can change it in the Settings.

Where is Text-to-Speech Used?

Text-to-speech systems were first developed to aid the visually impaired. In short, a computer-generated spoken voice would read the text to the user. In general, it is considered an assistive technology tool with potential for various applications.

Nowadays, tablets and smartphones have built-in text-to-speech features. They can read text files, the names of programs or folders, and even some web pages aloud.

Optical character recognition and text-to-speech convert printed material to digital text to sound. These devices are called reading pens and can scan and read back text.

Who Benefits from Text-to-Speech Software?

Experiencing website content is difficult for people with learning disabilities. Dyslexia is the most notable one, especially when it comes to large texts. TTS makes the internet experience less stressful for dyslexic members of the population.

Learning a second language can prove to be challenging when only having a visual output. Even with a basic understanding, reading fluently is not easy. By using text-to-speech software, people can achieve better comprehension and improve their pronunciation.

Content owners and publishers are other groups that enjoy this technology. Accessibility is one of the crucial consumer attraction and retention methods. TTS facilitates access for non-native speakers and visually impaired customers.

Text-to-speech allows kids to both see and hear text while reading. This makes it a multi-sensory experience. All this results in improved word recognition and the ability to pay attention to information.

Like we mentioned before, text-to-speech software improves customer experience through increased accessibility. The best example is the auto and manufacturing industry. They use TTS to read out essential documents and manuals.

Versatility is what text-to-speech brings and what makes it such an attractive market. Recent estimations value it at $3 billion by 2022, with more growth projected in later years.

The power of data science’s machine learning and intelligent automation techniques are not to be ignored. Both Microsoft and Google are investing heavily in their text-to-speech software development. They are gathering a massive amount of data, opening doors for new applications of AI in business.

Machine learning algorithms are making the voices more natural-sounding based on the content read. This effect is achieved by adjusting the correct tone, emotion, and various other nuances gathered by deep learning.

According to data provided by ReadSpeaker, their text-to-speech software has seen an increase in use since March 2020. Medical jargon is sometimes difficult to process for certain groups of individuals. That's where the user-friendliness of text-to-speech engines comes in handy. Staying informed about Healthcare has become a priority for many in these times. 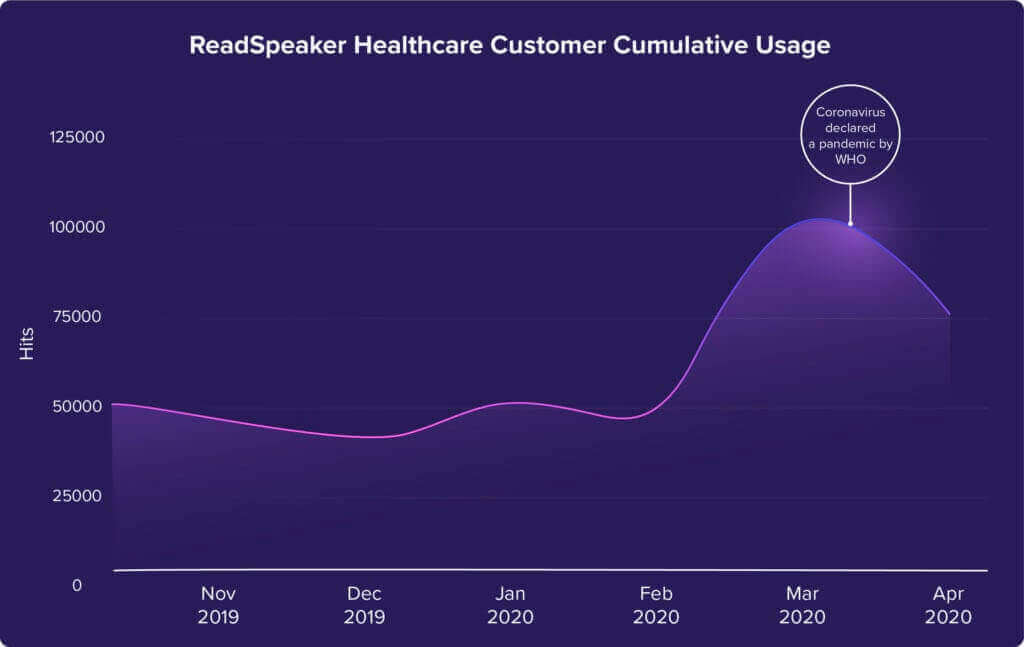 Source: COVID-19, text to speech, and the healthcare industry | ReadSpeaker

COVID-19 pandemic has turned traditional learning and teaching methods on its head. Schools and universities got forced to go online. It results in the discovery of various distance learning techniques. Compared to 2018, there has been a 32 percent increase in text-to-speech usage in academic environments alone.

The academic staff considers learning tools an integral part of their online classrooms. Many have also said that they wrongfully thought these tools were too complicated to use.

Rising unemployment rates force many individuals to reinvent themselves for extra learning. MOOCs are growing in popularity and adapting text-to-speech software in their courses. Generally, more and more people will embrace distance learning as an everyday thing.

How to Generate Speech From Text?

Using the incredible capabilities of machine learning and calculus, we created Real-Time-Voice-Cloning. The model consists of a Speaker Encoder, Synthesizer, and a Vocoder.

Spectrograms, obtained through Short-Time Fourier Transform, are a time-frequency representation of a signal. By converting spectrograms to “Mel-spectrograms,” we fed them to the speaker encoder. Its output is a low dimensional vector (d-vector), or informally the speaker embedding.

The synthesizer takes a sequence of text mapped to phonemes with embeddings as input. Then, it generates frames of a Mel spectrogram using Tacotron 2 architecture. Finally, the vocoder converts the Mel spectrogram into raw audio waves. DeepMind’s WaveNet model is the basis of it.

Text-to-speech generation thrives in the digital era. We could genuinely consider Christian Kratzenstein, a science pioneer. What started as a simple mechanical device got turned into a full-blown AI-powered speech engine. Siri will always be remembered as a kind assistant, helping many during his service.

Living in a fast-paced world can be a struggle for visually impaired people. Text-to-speech engines allow a smoother experience in the online world for them. Many companies are implementing TTS in the hope of a better customer retention model.

COVID-19 has certainly done wonders for this market. Online teaching methods opened doors for TTS to make its mark. The teaching staff is grateful to implement it in their class flow, as it works as a great teaching tool.